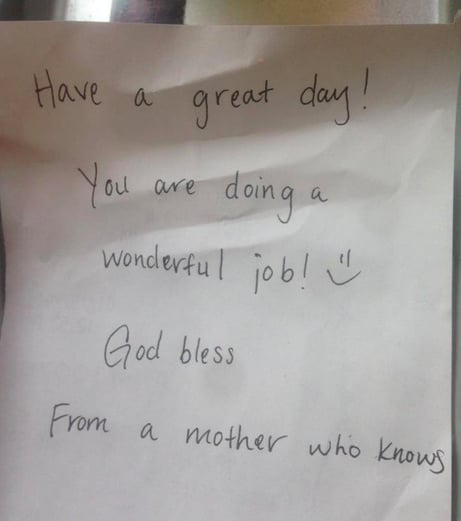 Lauren Nordberg knew that it wasn't going to be the easiest day. Her son had a dentist appointment, and since 6-year-old Elliot has autism, Lauren spent a lot of time prepping him for the visit.

As a reward, this Washington mom promised the little boy that they could get pancakes at his favorite spot on the way home. Unfortunately, it was a holiday weekend and the restaurant was more crowded than usual, so the pair couldn't sit at their favorite table.

"I should have known better than to take him out for lunch after a dentist appointment, but he was so excited for pancakes and I promised so there was no turning back," Lauren wrote on Facebook.

As soon as they ordered their food, Elliot began having a major meltdown complete with screaming and yelling. Fellow diners started giving them looks, so Lauren decided to take Elliot outside for a minute to calm down until the food was served. "You can see them making comments," Lauren said. "I've heard comments and snide remarks before like, 'He should show mom more respect.' I've had people tell me I should spank him."

Shortly after they returned for their meals, Elliot became upset again. Lauren decided just to ask for the bill so they could pay before things got any worse. But instead of bringing the check, the restaurant manager let them know that someone else had already paid their bill and presented her with this note from a complete stranger:

Have a great day! You are doing a wonderful job! God bless. From a mother who knows.

Both Lauren and the manager cried immediately at the kind gesture, and she's thankful to know that there is some good in this world. "Life with autism is already hard enough as it is," she said. "Just a little understanding goes a long way."