The Yoyo+ stroller from BabyZen folds up so small, you can hang it up.

"You really should start saving for that new car," a saleswoman at a popular San Francisco baby gear store told us. My husband and I were there to check out strollers and needed one that would fit in the trunk of our Mazda 3 hatchback. As we took the floor models out to the parking lot to test them in our trunk, it became apparent that none of them would fit.

We let the saleswoman know we'd have to keep looking — and that's when she suggested that the issue wasn't the size of the strollers in her store but the size of our car. We simply needed a new car, she told us with an air of inevitability, since we soon would have a baby on board. Only problem: if we bought a new car, it wouldn't fit in the tight parking spot in our condo. Guess we'd have to start saving for a new house, too. All thanks to a stroller.

While many Americans opt for stroller SUVs, I think of the Yoyo+ as the Smart Car of strollers.

Because my husband is French, I know things don't have to be this way. While some of my American mom friends recommended the UppaBaby Vista for its all-terrain tires and smooth ride (again, am I buying a car or a stroller?), many Parisians take a different approach to infant transportation.

While spending some time in Paris this Summer, I couldn't help but notice the It accessory among young French parents: the Yoyo+ stroller from BabyZen, a French company. At six months pregnant, I suddenly started paying attention to what chic French women were pushing, instead of what they were wearing. Everywhere I looked, I spotted the Yoyo+, which stands out with its white wheels. Pointing them out to my husband soon became a running joke. 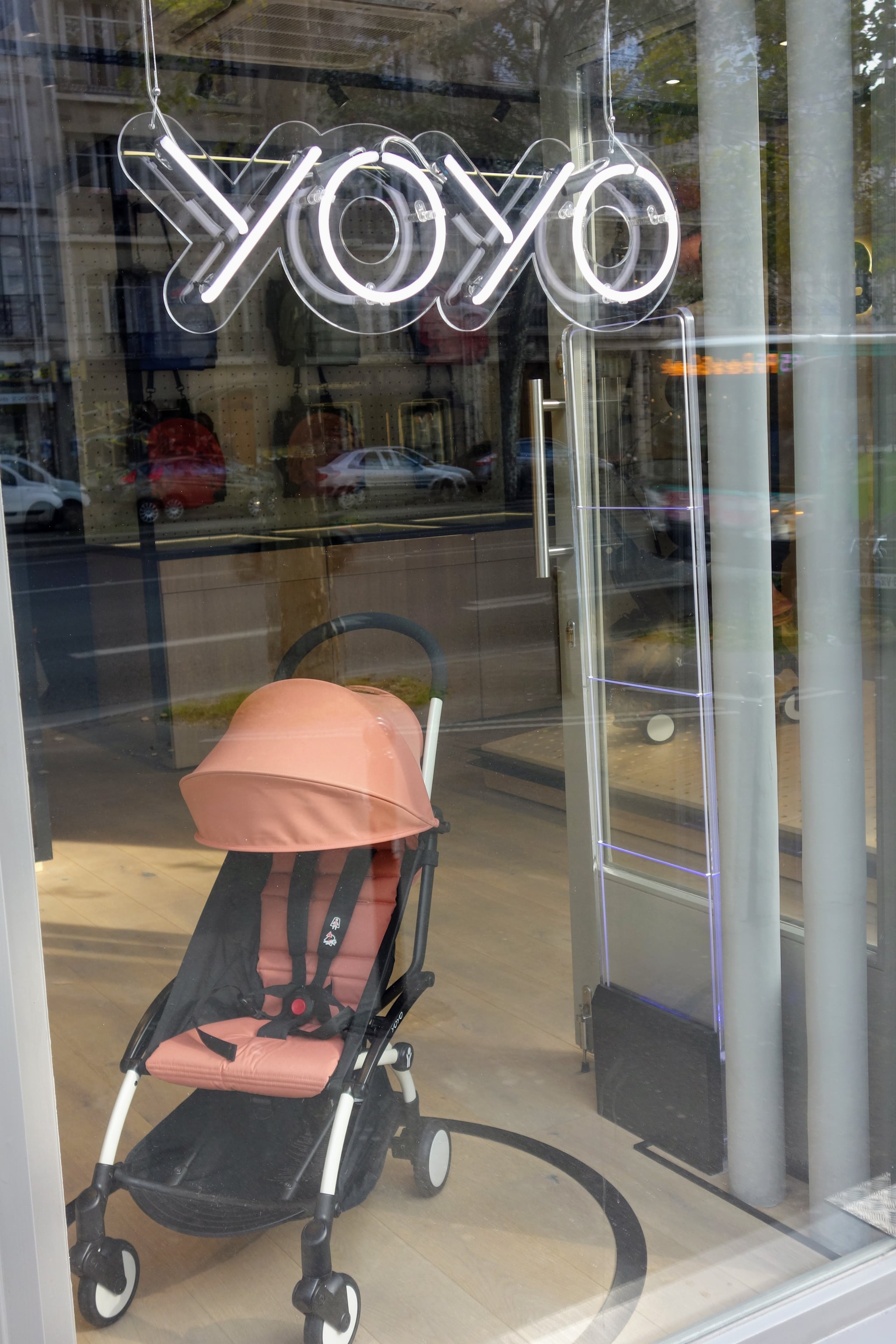 BabyZen has a showroom in Paris for its most popular line, the Yoyo+, which you'll see all over the streets of Paris.

While many Americans opt for stroller SUVs, I like to think of the Yoyo+ as the Smart Car of strollers. It does the trick. It's only 13 pounds, while the UppaBaby Vista weighs more than 26 pounds. Unlike typically flimsy umbrella strollers, it also takes an infant car seat. And it fits in the overhead bin on an airplane, meaning you don't have to gate-check it and can avoid buying both an everyday stroller and a travel stroller.

The company says since launching in the US in 2014, the Yoyo+ has become popular in urban areas like Brooklyn and Chicago, where parents want a stroller they can easily maneuver through city streets. And they're hopeful that suburban parents will soon recognize the convenience of having an easy-to-store, lightweight stroller.

Sure, the basket is tiny. But maybe that means French parents are less willing to let children — and their stuff — take over.

Sure, the Yoyo+ basket is tiny, which gives you less room to store your baby's sh*t. But maybe that means French parents are less willing to let children — and their stuff — take over. I've seen this with my French sister-in-law, who insists her two children put away all of their toys from the main living space before they go to bed each night so she and her husband can enjoy "adult time" in an adult-friendly space. The kids' belongings belong in the kids' rooms, not anywhere else. And that works, even in a relatively small apartment by American standards, because the kids don't have that much stuff to begin with.

Whether or not I opt for the Yoyo+ — which costs roughly $400 but can quickly add up to around $1,000 if you include all the features — I'm going to try my hardest to resist the "baby industrial complex." I will try to tune out the message that I need more space and more things just because I'm becoming a parent. This is my takeaway from all my stroller-spotting. I will hang on to my "impractical" hatchback and third-floor walk-up apartment as long as I can. And I certainly won't trade them in to make room for an oversize stroller.