Watch your plates around this now infamous criminal, Percy the cat. The sneaky kitty in question was caught red-handed by his human's camera as he attempted to swipe a freshly-baked cinnamon roll off the table.

Since making his internet debut, Percy's guilty mug shot has sbeen making the rounds on Twitter. It's gone completely viral with over 140,000 retweets and counting.

merry Christmas here's my cat getting busted for taking a cinnamon roll 2 seconds after we told him no pic.twitter.com/f0AAAx65O5

But who could be mad at this face? Just look at this guilty, adorable idiot. Hope you get all the cinnamon rolls of your dreams, Percy! 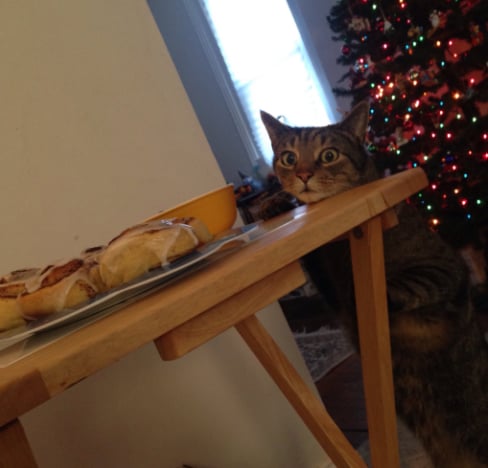 Join the conversation
TwitterCats
Latest Dogs, Cats, and Other Pets