This guy just put all other cat dads out there to shame with his brunch game. Chase Stout and his girlfriend, Kenzie Jones, adopted an adorable kitten named Mr. Wilson as a buddy for their pup, Huey.

Got a kitten this weekend & our German shepherd pup, Huey, thinks it's his. I'm not going to tell him any different. pic.twitter.com/xc11khSxX1

Soon after Mr. Wilson joined the family, Kenzie had to head out of town, leaving all of the four-legged family members in her boyfriend's care. Little did she know she had nothing to worry about – other than missing out on a viral family breakfast.

Stout was making pancakes for himself when he realized he couldn't deprive Mr. Wilson of a hot breakfast. He made them both a stack of flapjacks, telling Buzzfeed, "Obviously I had a stack of three so my man Wilson had to have a stack of three as well." The adorable pictures he tweeted from the family feast have since gone viral, with over 41,000 retweets so far. 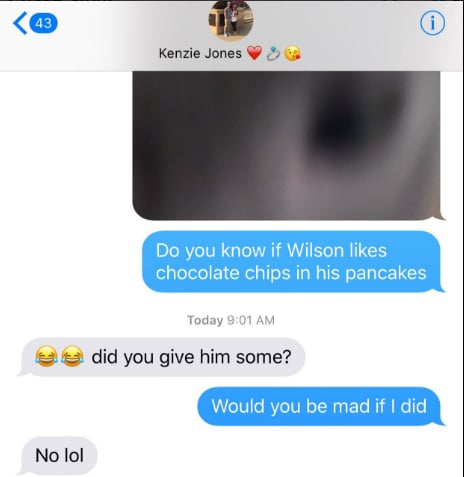 When your girlfriend goes out of town and tells you "don't forget to feed our cat." pic.twitter.com/cJk1VRVzUQ

Not to worry, Chase is such a responsible kitty dad that he already knew not to include chocolate chips. Cheers to many more family breakfasts to come for this happy family.

I should have specified before 60k veterinarians came forward, that they didn't actually have chocolate in them. 😂😂 pic.twitter.com/1yDOlg19vW

Join the conversation
TwitterPancakesCats
Latest Dogs, Cats, and Other Pets