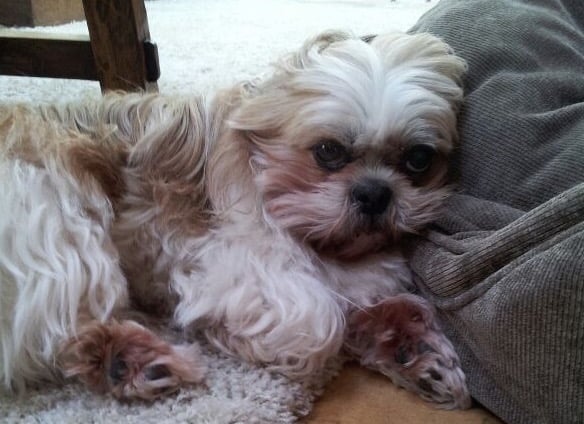 By the time I was 12 years old, my family had just about every type of pet you could own. We adopted hamsters, a rabbit, countless fish, a turtle, frogs, and even birds — needless to say, we're animal people. But no matter how much we enjoyed our small pets, my sister and I always longed for a puppy. So when I returned from sleep-away camp in sixth grade and was welcomed by a furry little Shih Tzu named Tyler, it was quite possibly the happiest day of my life. He was the perfect surprise, and my family became attached immediately.

A couple of years went by and Ty was the picture of perfect health, until we came home from a family vacation to find him acting unlike his usual happy self. He had no interest in playing or eating, he was losing tons of hair and weight, he incessantly gnawed at his skin, and he would arch his back at random times throughout the day.

Frantic with worry, we rushed him to the vet to run tests. After the results were inconclusive, we took him to have an X-ray, which is when doctors found a large mass on his thymus gland. Lodged between his heart and his lungs, my little boy had a malignant tumor. Every doctor we spoke to insisted he be put to sleep. We were told that even if we tried to treat his cancer, he would only live another two to three years.

I distinctly remember the day my parents broke the news. We sat on the kitchen floor holding our sick puppy and cried for hours, completely heartbroken and torn. How could we give up on this precious thing? How could we not fight for him?

And so we did.

An invasive surgery such as Ty's is draining for a human, and he was only a 10-pound dog. After doctors removed his tumor, they advised that we continue with chemotherapy, so for six months we took him to get his treatment. He lost all of his hair, and as many canine enthusiasts know, Shih Tzus are known for their luscious manes, so this was particularly upsetting.

Once his cycle was finished, all we could do was wait. He was successfully in remission, but we still couldn't shake what the doctors had told us: "Only two to three more years . . . " So with that in mind, we treated him like the prince he was. Each day we spent with our strong survivor was cherished. We loved him like no puppy has ever been loved before — at least in our minds.

He has beat the formidable odds, and we can't help but consider him a medical miracle. The only explanation doctors have offered to us is that he is still alive because of the immense bond he has with my family. He is our pride, our joy, and our whole world. As he ages, memories of the emotional roller coaster we all endured grow foggier, but what he went through has never been forgotten.