When Lily Cardone's mother received the flowers, she assumed it was for her from her husband. But after reading the note attached, she quickly realized that was not the case. "Sebastian, Feel better you'll be back in the game very soon. Love Daddy," wrote the sweet dad. Her father sent over flowers to help cheer up the family's 10-year-old dog, Sebastian, who recently underwent ACL surgery, reports BuzzFeed.

My dad sent flowers to my house today, and my mom thought they were for her 😂😂 THINK AGAIN pic.twitter.com/7jMQhrsDJW

Cardone's mother posted photos of the hilarious mix-up on her personal Facebook page and Lily shared screenshots of the post on her Twitter account. "My dad sent flowers to my house today, and my mom thought they were for her. THINK AGAIN," she wrote. Cardone's friends were quick to point out the irony of her mothers Facebook post going viral online.

"Of course one of your moms infamous fb posts makes you famous," commented one user. "YOUR FAMILY IS SO EXTRA I ABSOLUTELY CANNOT DEAL WITH THIS" another person wrote. "Now you see where I got it from," Lily replied. Keep reading to see more adorable photos of Sebastian that will make you understand why Cardone's father is so in love with him ahead.

My mom threw my dog a 10th birthday party 😂🎉 pic.twitter.com/Rud3ItXHRl

So excited to go home and see my puppy tonight❤️❤️❤️ pic.twitter.com/1zGm8hDkNb

The saddest part about leaving for college is leaving my puppy😭 pic.twitter.com/WpUfbRHc2Q 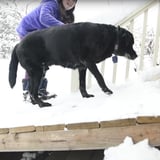 Tech Tips
Zoom Lets You Customize a Virtual Background For Video Chats, So This Should Be Good
by Kelsey Garcia 30/3/20
Latest Technology & Gadgets