President Donald Trump received a flurry of backlash for his executive order that indefinitely bans the United States from accepting Syrian refugees. Everyone from Hillary Clinton to the CEO of Starbucks has responded to the order, which also temporarily restricted US entry by people from seven, primarily Muslim countries. Although Trump's administration lightened up the restrictions a bit after the nation's general outrage, Google got in on the action by taking a subtle jab at POTUS's questionable actions.

The Google homepage on Jan. 30 2017, honored Fred Korematsu, a civil rights activist who spent his life fighting against the imprisonment of Japanese Americans during World War II. 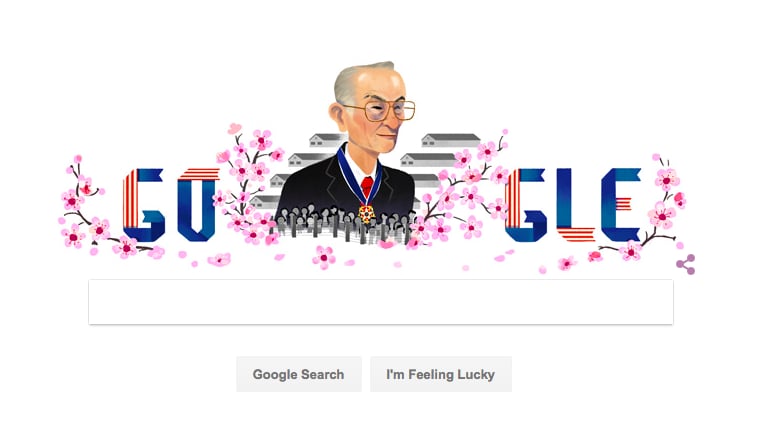 Following the 1942 bombing of Pearl Harbor, he and other Japanese-Americans were forced into internment camps, as ordered by then President Franklin D. Roosevelt. Today marks what would have been Korematsu's 98th birthday; as this isn't a milestone celebration, many believe that Google's spotlight on him denotes a subtle yet intentional reference to Trump's Muslim ban. Some are even calling it a "sub-doodle," as a play on the popular Twitter term "subtweet."

Google's shade-throwing comes after the tech company's CEO, Sundar Pichai, sent an email to his employees, just hours after the ban, explaining how it will affect more than 100 staff members. "It's painful to see the personal cost of this executive order on our colleagues," Pichai wrote in an email, according to the Wall Street Journal. Following Trump's immigration order, Pinchai advised all Google employees who were traveling overseas for work to return to the US as soon as possible to avoid any complications with the new ban.

The search engine's executives have also started a crisis campaign for the cause. The $2 million fund can be matched with up to $2 million in donations from employees, which totals $4 million for organizations like the American Civil Liberties Union and Immigrant Legal Resource Center. It looks like tech companies aren't planning to back down anytime soon to Trump's controversial actions.