JetSmarter makes private travel so easy! I wish I would have thought of this app, it's genius! Thanks @letsjetsmarter

You've seen them hop on a private plane on their TV show Keeping Up With the Kardashians, and if you've ever wondered how the klan manage to score a super swanky vehicle time after time with virtually no preparation, here's your answer.

Kim Kardashian has shared a video showing just how she travels around on small jets with her family, and it seems it's as simple as booking an Uber for her.

The businesswoman posted a clip of herself using an app called JetSmarter - financially backed the Saudi Arabian Royal Family - explaining why she chooses to tote her kids North and Saint around in the ultimate style.

"If you're a mom you know how crazy it is to travel with two kids," she starts in the Instagram video. "That's why I'm so grateful for JetSmarter, there's this app that you can go on, find a private plane for you and your family that just makes everything so easy. Thank you so much JetSmarter, you are a lifesaver. I love you guys."

Kim and Kanye West's pal Jay Z is also one of the investors so it's no surprise she's among the big names using it. 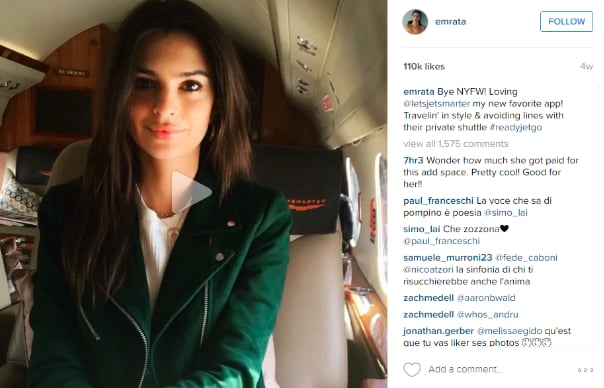 The app is said to make traveling by private jet even cheaper by cutting out the middle man, it's also an opportunity for members - who pay a $9,000 (AED33,057) annual fee - to network in the air. Well you're not going to bump into your idol on the bus so it's perhaps a small price to pay for some.

Over the last six months, the company has grown throughout North America, the Middle East, and Europe, and now provides 52% more flight options for users through JetDeals (free flights to new destinations from your favorite cities), JetShuttle (free seats on scheduled routes) and its JetCharter (private jet booking to over 170 countries with guaranteed availability) service.

In the Middle East, JetSmarter currently run regular routes between Dubai, Abu Dhabi, Jeddah, Riyadh and Kuwait, with new routes to be introduced soon. So what's the cost of a ticket? Depending on the route, it's said to be comparable to the cost of a first class ticket since it works by filling spaces that otherwise would go unused.