One dad wanted to make sure his kid stood out on Halloween. The proud father, Reddit user fivetreoh, says he created this epic Lego costume to do the trick. He spent two months working on the costume, which landed his son first place in a costume contest along with a $25 gift card.

If you're wondering how he was able to pull off the realistic look, the awesome dad reveals that it took a lot of strategic planning. The lightweight costume was made out of one-inch styrofoam, and for the eyes, he cut out the shape and then replaced the open space with a white screen for his son to see out of.

"Everything blue is paint and the red on the helmet is paint," he revealed, adding, "the front of the costume is actually a vinyl decal, not paint." This guy deserves to win a dad of the year contest for his creativity and efforts put into this amazing costume! 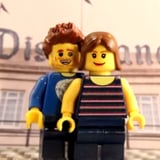